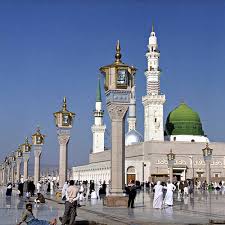 'Longest table in the world' in Prophet’s Mosque, Madina
By Abdul Rahman Shaheen

Riyadh: Serving Iftar for visitors to the Prophet's Mosque is a cherished tradition for the people of Madinah.
It’s a practice which dates back 1,400 years, since the Prophet first built the mosque.
Dr Mohammad Khoja, who researches the history of Madina, says there are parts of the mosque named after families, who for centuries have been bringing food to feed those who attend Iftar. “The families make budgets in which every member contributes. They buy food and serve the visitors," he said.
In fact, some of the tables on which the food is laid out are very old and have been donated by specific clans. Often these relics relay the family history and ranking in Madina.
For instance, laying down tables in Al Rawdah Al Sharifa (also known as the old Haram) has been done by the Al Kurdi and Al Humaid families for tens of years.
Talking to Gulf News about how these Iftars are prepared, Mohammad Yousuf Mahmoud, said preparations take place long before the advent of the fasting month. "We serve the best kind of Madina dates, in addition to water, orange juice and fruit like yoghurt, orange, bananas and grapes,” he says.
"But it is not just the food for which the mosque is famous.
“We have the longest table on the face of earth,” he adds. “It extends the length of the Prophet's Mosque. Millions of people have taken their Iftar on this table.
Mohammad Ibrahim Ammar, a Madina resident has been bringing food to the mosque for Iftar for more than 40 years. "We have inherited this tradition from our fathers and grandfathers and will hand it down to our children and grandchildren," he said..
The average cost per Iftar for one person is two to three Saudi riyals.
As milk is the main component of the meal, milk companies compete to sell their products at discount prices outside the mosque.
Bread, known as ‘Madinah Shiraik’ is usually served for breakfast. It’s only allowed to be eaten in the courtyard outside the mosque however. Inside the mosque, only dates, yoghurt, coffee, and Al Shiraik bread are allowed.
Residents usually start laying the tables for Iftar immediately after Asr. They serve an average of 300,000 meals a day.
The director of public relations at the Presidency of the Affairs of the Two Holy Mosques, Abdul Wahid Ali Al Khattab, says about 170,000 meals are served each day in the mosque, while 130,000 are served in the outside.