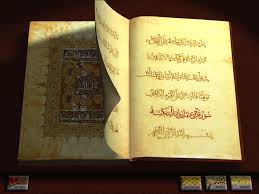 In the name of Allah, Most Gracious, Most Merciful.

1. Praise be to Allah, Who created (out of nothing) the heavens and the earth, Who made the angels, messengers with wings,- two, or three, or four (pairs): He adds to Creation as He pleases: for Allah has power over all things.

3. O men! Call to mind the grace of Allah unto you! is there a creator, other than Allah, to give you sustenance from heaven or earth? There is no god but He: how then are ye deluded away from the Truth?

4. And if they reject thee, so were apostles rejected before thee: to Allah back for decision all affairs.

5. O men! Certainly the promise of Allah is true. Let not then this present life deceive you, nor let the Chief Deceiver deceive you about Allah.

6. Verily Satan is an enemy to you: so treat him as an enemy. He only invites his adherents, that they may become Companions of the Blazing Fire.

7. For those who reject Allah, is a terrible Penalty: but for those who believe and work righteous deeds, is Forgiveness, and a magnificent Reward.

8. Is he, then, to whom the evil of his conduct is made alluring, so that he looks upon it as good, (equal to one who is rightly guided)? For Allah leaves to stray whom He wills, and guides whom He wills. So let not thy soul go out in (vainly) sighing after them: for Allah knows well all that they do!

9. It is Allah Who sends forth the Winds, so that they raise up the Clouds, and We drive them to a land that is dead, and revive the earth therewith after its death: even so (will be) the Resurrection!

10. If any do seek for glory and power,- to Allah belong all glory and power. To Him mount up (all) Words of Purity: It is He Who exalts each Deed of Righteousness. Those that lay Plots of Evil,- for them is a Penalty terrible; and the plotting of such will be void (of result).

11. And Allah did create you from dust; then from a sperm-drop; then He made you in pairs. And no female conceives, or lays down (her load), but with His knowledge. Nor is a man long-lived granted length of days, nor is a part cut off from his life, but is in a Decree (ordained). All this is easy to Allah.

12. Nor are the two bodies of flowing water alike,- the one palatable, sweet, and pleasant to drink, and the other, salt and bitter. Yet from each (kind of water) do ye eat flesh fresh and tender, and ye extract ornaments to wear; and thou seest the ships therein that plough the waves, that ye may seek (thus) of the Bounty of Allah that ye may be grateful.

13. He merges Night into Day, and he merges Day into Night, and he has subjected the sun and the moon (to his Law): each one runs its course for a term appointed. Such is Allah your Lord: to Him belongs all Dominion. And those whom ye invoke besides Him have not the least power.

14. If ye invoke them, they will not listen to your call, and if they were to listen, they cannot answer your (prayer). On the Day of Judgment they will reject your "Partnership". and none, (O man!) can tell thee (the Truth) like the One Who is acquainted with all things.

15. O ye men! It is ye that have need of Allah. but Allah is the One Free of all wants, worthy of all praise.

16. If He so pleased, He could blot you out and bring in a New Creation.

18. Nor can a bearer of burdens bear another's burdens if one heavily laden should call another to (bear) his load. Not the least portion of it can be carried (by the other). Even though he be nearly related. Thou canst but admonish such as fear their Lord unseen and establish regular Prayer. And whoever purifies himself does so for the benefit of his own soul; and the destination (of all) is to Allah.

19. The blind and the seeing are not alike;

20. Nor are the depths of Darkness and the Light;

22. Nor are alike those that are living and those that are dead. Allah can make any that He wills to hear; but thou canst not make those to hear who are (buried) in graves.

24. Verily We have sent thee in truth, as a bearer of glad tidings, and as a warner: and there never was a people, without a warner having lived among them (in the past).

25. And if they reject thee, so did their predecessors, to whom came their apostles with Clear Signs, Books of dark prophecies, and the Book of Enlightenment.

26. In the end did I punish those who rejected Faith: and how (terrible) was My rejection (of them)!

27. Seest thou not that Allah sends down rain from the sky? With it We then bring out produce of various colours. And in the mountains are tracts white and red, of various shades of colour, and black intense in hue.

28. And so amongst men and crawling creatures and cattle, are they of various colours. Those truly fear Allah, among His Servants, who have knowledge: for Allah is Exalted in Might, Oft-Forgiving.

29. Those who rehearse the Book of Allah, establish regular Prayer, and spend (in Charity) out of what We have provided for them, secretly and openly, hope for a commerce that will never fail:

30. For He will pay them their meed, nay, He will give them (even) more out of His Bounty: for He is Oft-Forgiving, Most Ready to appreciate (service).

31. That which We have revealed to thee of the Book is the Truth,- confirming what was (revealed) before it: for Allah is assuredly- with respect to His Servants - well acquainted and Fully Observant.

32. Then We have given the Book for inheritance to such of Our Servants as We have chosen: but there are among them some who wrong their own souls; some who follow a middle course; and some who are, by Allah.s leave, foremost in good deeds; that is the highest Grace.

33. Gardens of Eternity will they enter: therein will they be adorned with bracelets of gold and pearls; and their garments there will be of silk.

34. And they will say: "Praise be to Allah, Who has removed from us (all) sorrow: for our Lord is indeed Oft-Forgiving Ready to appreciate (service):

35. "Who has, out of His Bounty, settled us in a Home that will last: no toil nor sense of weariness shall touch us therein."

36. But those who reject ((Allah)) - for them will be the Fire of Hell: No term shall be determined for them, so they should die, nor shall its Penalty be lightened for them. Thus do We reward every ungrateful one!

37. Therein will they cry aloud (for assistance): "Our Lord! Bring us out: we shall work righteousness, not the (deeds) we used to do!" - "Did We not give you long enough life so that he that would should receive admonition? and (moreover) the warner came to you. So taste ye (the fruits of your deeds): for the wrong-doers there is no helper."

38. Verily Allah knows (all) the hidden things of the heavens and the earth: verily He has full knowledge of all that is in (men's) hearts.

40. Say: "Have ye seen (these) 'Partners' of yours whom ye call upon besides Allah. Show Me what it is they have created in the (wide) earth. Or have they a share in the heavens? Or have We given them a Book from which they (can derive) clear (evidence)?- Nay, the wrong-doers promise each other nothing but delusions.

41. It is Allah Who sustains the heavens and the earth, lest they cease (to function): and if they should fail, there is none - not one - can sustain them thereafter: Verily He is Most Forbearing, Oft-Forgiving.

44. Do they not travel through the earth, and see what was the End of those before them,- though they were superior to them in strength? Nor is Allah to be frustrated by anything whatever in the heavens or on earth: for He is All-Knowing. All-Powerful.

45. If Allah were to punish men according to what they deserve. He would not leave on the back of the (earth) a single living creature: but He gives them respite for a stated Term: when their Term expires, verily Allah has in His sight all His Servants.