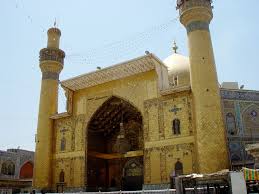 The secret of Imam Ali's (as) force of attraction

What is the reason for the friendship and love for Ali in people's hearts? Nobody has yet discovered the secret of this love. That is, no one has been able to formulate it, and say that if it were like this then that would follow, or if it were like that then this would happen. However it does of course have a secret. There is something in the love which dazzles the one who loves and draws him towards it. This attraction and love are the highest degrees of love; Ali is the one whom people's hearts adore, whom humanity loves. Why? In what does Ali's extraordinariness lie, that it incites love and draws hearts towards itself, that it plays the tune of eternal life and lives for ever? Why do all hearts find out about themselves through him, and do not feel him to be dead but find him living?

Certainly the basis for love for him is not his body, because his body is not now among us and we have not perceived it with our senses. Love for Ali is also not hero-worship, which exists in every nation. It is a mistake, too, to say the love for Ali is by way of love for moral and human excellence, and that love for Ali is a humanistic love. It is true that Ali was the manifestation of the perfect man, and it is true that man loves great figures of humanity; but if Ali had had all those human excellences that he had - that wisdom and knowledge, that self-sacrifice and altruism, that humility and modesty, that courtesy, that kindness and mercy, that protection of the weak, that justness, that liberality and love of freedom, that respect for humanity, that generosity, that bravery, that magnanimity and mercy towards his enemies, and, in the words of Rumi:

In bravery you are the Lion of the Lord,

In generosity who indeed knows who you are? [1]

that munificence, benevolence and beneficence - if Ali had had all these, which he did have, but had not had the divine touch in him, it is quite certain that there would not have been the feeling of sympathy and awakening of love that there is today.

Ali is loved in the sense that he had the divine link; our hearts are unconsciously completely involved with, and connected to, the Truth, right in their depths, and since they find Ali to be a great sign of the Truth and a manifestation of the attributes of the Truth they are in love with him. In reality, the basis for the love for Ali is the connection of our souls with the Truth which has been laid in our primordial natures, and since our primordial natures are eternal, love for Ali is also eternal.

There are many outstanding features in Ali's being, but that which has assigned him a resplendent and shining place for ever is his faith and morality, and it is that which has given him his divine charisma.

Sawdah al-Hamdaniyah, a self-sacrificing and devoted follower of Ali, extolled Ali in front of Mu'awiyah and among other things said this verse:

May the blessing of God be vouched to him

Whom the grave took away and with whom justice was interred.

He had a pact with God that he should put no substitute in His place,

Thus he was joined with Truth and Faith.

Sa'sa'ah ibn Suhan al-'Abdi was another one of those lovers of Ali. He was one of those who took part on that night with a few others in the burial of Ali. After they had buried Ali and covered his corpse with soil, Sa'sa'ah put one of his hands over his heart, threw earth over his head and said:

"May death be agreeable to you, whose birth was pure, whose patience was firm, whose holy struggle was great! You attained your aim and your commerce was fruitful.

"You fell down before your Creator, and He gladly accepted you and His angels appeared around you. You were placed near the Prophet, and God gave you a place near him. You reached the degree of your brother, Mustafa, and you drank from his overflowing cup.

"I beseach God that I may follow you and that I may act according to your ways; that I may love those who love you, and be the enemy of those who are your enemy, that I may be gathered in the pavilion of your friends.

"You saw what others did not see, and reached what others did not reach; you pursued the holy struggle beside your brother, the Prophet, and you rose up for the religion of God as was worthy of it, till age-old habits were done away with, confusion curbed and Islam and the faith put in order. May the best of blessings be upon you!

"Through you the backs of the believers were made firm, the ways made clear and habits broken. No-one could amass your virtues and excellences in himself. You answered the call of the Prophet; you jumped ahead of others in accepting him: you hurried to help him, and protected him with your life. You struck with your sword, Dhu' l-fiqar, in places of fear and savagery, and you broke the back of oppression. You caste down the structures of polytheism and vileness, and you pulled down those who were astray into dust and blood. So may you be well pleased, O Amir al-mu'minin !

"You were the closest of men to the Prophet, you were the first person to follow Islam. You were overflowing with certainty, strong of heart and more self-sacrificing than any, your share in good was greater. May God not deprive us of retribution for your suffering, and may He not despise us after you have gone!

"By God, I swear that your life was the key to good, the lock against exil; and your death is the key to every evil and the lock against every good. If the people had accepted you, blessings would have showered on them from the heaven and the earth; but they preferred this world to the next." [46]

Truly they preferred this world, and as a-consequence they could not endure the justice and unwaveringness of Ali. In the end the hand of stiffness and stagnation came out of the sleeve of the people and martyred Ali.

Ali - may peace be upon him - is without equal in having totally selfless friends and people who loved him, who have given their lives in the path of friendship and love for him. Their wonderful, absorbing and stunning biographies honour the pages of Islamic history. The criminal hands of such despicable people as Ziyad ibn Abih and his son `Abdullah, as Hajjaj ibn Yusuf and Mutawakkil, and at the head of them all Mu'awiyah ibn Abi Sufyan, are stained with the blood of these human lives up to their elbows.