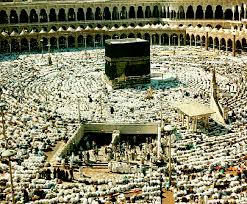 By Ahmad Al-Hudhaifi
RIYADH – A study is being conducted on the expansion of the circumambulation – Tawaf - area of the Grand Mosque in Makkah, according to Dr. Saleh Bin Abdullah Bin Humaid, Chairman of the Supreme Judicial Council.

Bin Humaid mentioned the study on Thursday during the Al-Jasser weekly Diwaniya in Riyadh, where Saudi intellectuals had gathered to discuss various local and regional issues.

Although Bin Humaid did not provide any further details, it is expected that the expansion of the Tawaf area is aimed at reducing the massive overcrowding around the Holy Ka’bah during the Haj and Umrah seasons. It would also help to provide further safety for pilgrims.

According to statistics issued by the Custodian of the Two Holy Mosques’ Institute for Haj Research, during peak periods, there are 40,000 people per hour, at the rate of six people per square meter, performing the Tawaf.

Many of those concerned with crowd management at the Grand Mosque said that solutions need to be sought for overcrowding from the Shariah and Islamic jurisprudence.

Experts in crowd management said that engineers could be brought in to help with providing solutions to the problem.

The Tawaf area has a diameter of 64.8 meters with the center being the Holy Ka’bah. The total area for the Tawaf - the Mataaf - is 4,100 square meters.

He said his service at the Grand Mosque in Makkah started 50 years ago when he was a student and memorized the Holy Qur’an. He spoke about his love for Makkah and said that it was closer to his heart than Riyadh.

He said the major hurdle in producing his work was the lack of references, especially books on the Imams of the Two Holy Mosques. He urged intellectuals to hold seminars and to conduct studies on the Imams. He said he was determined to complete another work on the services provided at the Two Holy Mosques, including the provision of drinking water and meals, in what is known as Al-Siqaya and Al-Rifada.
http://www.saudigazette.com.sa/index.cfm?method=home.regcon&contentID=2010010859475


Land prices in Makkah soar
By ANWAR AL-SAYED | Feb 18, 2010
MAKKAH: The price of a single square meter of land in Makkah has reached SR500,000 in some places with the potential to increase further close to the Grand Mosque.
“The price of land is steadily increasing with the expansion of the Grand Mosque to accommodate more worshippers,” said real estate investor Ahmad Al-Ghamdi.
“This is the one place in the world where land is so expensive. Land in Makkah, especially close to the Grand Mosque, has become more precious than gold and diamonds,” he added.
Al-Ghamdi said investment cartels are in fierce competition to gain a foothold because of the feasible returns. “Muslims flock to Makkah in millions every year from across the world. The city therefore needs more buildings to accommodate them,” he said.
Al-Ghamdi also said the price of land in areas away from the Grand Mosque is also increasing due to development projects around the prayer complex. “The demand for houses by residents of Makkah has increased by more than 54 percent. This is more than the normal demand everywhere and more than the average annual population increase which is 2.5 percent,” he said. Ibrahim Abdul Halim, a real estate evaluator, said the rising demand for homes is natural since the city is important to Muslims across the world. “Apart from visitors and pilgrims, Makkah has a population of more than 688,000 people, including around 137,000 families,” he said.
Abdul Halim said the families need 88,600 apartments and 13,700 independent houses. “Over the next few years, there will be an increased demand for more than 35,000 apartments with investments of more than SR12 billion and about 2,500 villas and independent houses costing more than SR14 billion,” he said. He also said Makkah will need about 13 million square meters of empty land to construct apartment buildings and about a million square meters to build villas.
Meanwhile, local press reports on Wednesday said compensation to be given to the owners of buildings, which were demolished for the expansion of the Grand Mosque, will reach more than SR40 billion.
http://arabnews.com/saudiarabia/article18746.ece


Compensation fixed for Haram Mosque's southern courtyard expansion
Demolition work to begin after compensation has been disbursed to those affected by expansion project on Haram Mosque
By Abdul Rahman Shaheen - March 22, 2010
Riyadh: As part of expansion work on the Haram Mosque in Makkah, residential and commercial buildings and real estates on a total area of 1,500 sq. meters will be expropriated.

This area, consisting of eight various sites, will be added to the southern courtyard of the holiest mosque in Islam, close to its main entrance of King Abdul Aziz Gate.
Demolition work will begin after compensation has been disbursed, said the chairman of the Committee of Projects for the Expansion of Haram Courtyards.
Committee chairman Abbas Qattan said that owners of the expropriated real estates will be given compensation ranging between 450,000 and 550,000 Saudi riyals per square meter.
Qattan said that among the sites to be demolished are the Ajyad Hospital, bus station of Saudi Public Transport Company, and the site near Dar Al Tawhid Intercontinental Hotel.
More than 1,000 properties in the northern and western areas, including Shamiya and Shubaika, have already been demolished in the first phase.
"The new expropriated area will be used for the construction of new toilets for men and women, pedestrian tunnels, and some other utility and service projects for the pilgrims and visitors to the Haram Mosque," he said.
Abbas Qattan disclosed that construction works of the expansion of the northern courtyard of the holy mosque have begun.
Compensation amounting to a total of SR 40 billion are being distributed to owners of properties that were expropriated for the expansion of the north and western courtyards.
Hundreds of buildings in the northern Gazza area are being demolished as part of the second phase of demolition.
The expansion project, which will change the face of Haram area, was ordered by King Abdullah bin Abdul Aziz in January 2008 at a cost of SR 10 billion.

The expansion will facilitate the accommodation of an additional 500,000 worshippers by creating more prayer space on the northern and northwestern parts of the mosque, and would cover an area of 370,000 square metres.