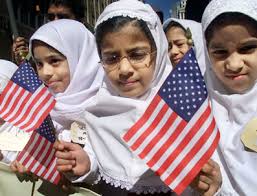 A large majority of Americans (70%) believe that Muslims want peace, according to a survey carried out by The Muslim West Facts Project, a sister body of the Gallup Foundation.

Almost 2 out of 3 respondents said they felt no prejudice at all toward Muslims, another encouraging statistic thrown up by the survey, published January 21, which was part of a project to find ways of increasing understanding between Muslims and the rest of the American population. Still, the results weren’t all positive, with only 42% feeling at least “somewhat favourable” towards Islam, compared to 58% for Buddhism, 71% for Judaism and a staggering 91% towards Christianity. Knowing a Muslim personally, as half of respondents did, made no difference to the level of prejudice a person felt.

Senior Analyst and Executive Director of the Gallup Center for Muslim Studies, Dalia Mogahed, explained that “...one person being nice enough could simply be explained as that person being an exception. What really seems to impact one’s perception of a group much more than knowing an individual is having a positive opinion of that group’s distinguishing characteristic, which in this case is their faith.”

Religious people have a positive impression of Islam with those attending religious services at least once a week more likely to claim they felt no prejudice towards Muslims. Mogahed explained that people who are more religious generally consider prejudice a moral evil and often have respect for the devout of other faiths. Non-white respondents also felt less prejudice towards Muslims and Islam than their white counterparts.

Researchers also found a link between anti-Semitism and Islamophobia. Americans who felt “a great deal” of prejudice against Jews were much more likely to feel the same about Muslims, although the results could not explain why the two prejudices are linked. Mogahed said bias against both faiths should be studied together in order to understand the phenomenon. “Groups working against the two types of prejudices should perhaps form a closer alliance,” she said.

Public knowledge of Islam is also slowly increasing, but still lags behind other major religions, with 37% of respondents saying they knew at least “a little” about Islam, compared with 51% for Judaism and 94% for Christianity, but only 28% for Buddhism.

Perhaps resentment towards Islam is fuelled by the unrelenting media negativity towards the faith, with Mediatenor’s recently published figures for the last three years showing a general trend where more than 60% of media coverage regarding Islam is negative, with less than 10% positive. Corresponding figures for Christianity show the majority of reporting being neutral, with equally small amounts of negative and positive coverage.

The survey ends with a series of recommendations, calling on Muslim Americans to do more to teach others about their faith, and build coalitions with “other minority groups and faith institutions.” It also recommends that the Government “study and track anti-Semitism and anti-Muslim sentiment together as related phenomena.”