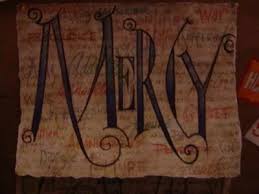 The Prophet (s) once kissed his grandson, Al-Hasan Ibn `Ali, while Al-Aqra Ibn Haabis was in his presence. So Al-Aqra said to him: " You kiss your children. I swear by Allah, I have ten children and I never kissed any one of them!" The Prophet (s) replied: "He who doesn't show mercy (to others) will not be shown mercy (by Allah)." Verily, mercy - in our religion - encompasses this world and the hereafter, as well as mankind, animals, birds, and the surrounding habitats.

Allah says: "And My mercy encompasses every thing."

Allah has made his sending forth of the Prophet (s) as a mercy to the universe. He says:

"And We have not sent you (O Muhammad) except as a mercy to the worlds."

And indeed Allah has commanded that mercy be applied to every thing and in every action. So even when you slaughter you sacrificial animal, you show mercy to it by saying Bismillaah and by sharpening your sword (so that it will be a quick and painless death). The Prophet (s) said:

"Verily Allah has prescribed Ihsan (goodness) for everything. So when you slaughter, then slaughter in a good manner, and when you kill (in war), then kill in a good manner. And let each of you sharpen his blade and let him spare the animal he slaughters from suffering."

And Allah indeed forgave a prostitute from the Jews who showed mercy to a dog that was dying from thirst. She filled her shoe with water and then taking hold of the dogs mouth, she gave it the water to drink. So Allah was pleased with her for what she did and forgave her sins.

And once our Prophet (s) saw one of his companions grab the baby of a lark, and it began screaming over the heads of the Companions. So the Prophet(s) said: "Whosoever deprived this (lark) of her offspring, please return her offspring to her!"

The more weak and poor a human being is, the more required we are of showing mercy to him. And being gentle with him is what is most incumbent. This is why our Lord has forbidden us from oppressing the orphan. Allah says: "Therefore, treat not the orphan with oppression. And do not repel the beggar."

The Prophet (s) said: "The person that looks after and supports the widow and the needy one is

like the mujahid (one struggles) in the way of Allah." And he (s) would affectionately touch the head of the orphan and say: "I and the guardian of an orphan will be (together) like this in Paradise and he gestured with his index and middle finger." Indeed he (s) commanded us to take care of the children and the women and the elders. Thus, in his last words to his Companions and his nation, he said:

"The prayer and what your right hands possess." "Take good care of the women (i.e.your wives)."

And he (s) said: "The best of you is the best to his wives. And I am the best amongst you with my wives."

Mercy is something innate, which Allah has placed into the hearts of (all) His creatures, even the lions - the most dangerous of them are kind and merciful to their children. Allah is more merciful to His creation than a mother is to her child. That is why on the day that He created mercy, He created one hundred parts to it. And He left ninety-nine parts with Him, by which He will show mercy to His servants on the Day of Judgment, and sent down one single part of mercy to earth, which humans and animals share amongst themselves.

The Messenger of Allaah (s has condemned the person that is void of any mercy and who does not attain a large amount of it. This is why he (s) condemned the one who breaks family ties. He (s) said:

"Kinship is connected to the Throne (`Arsh). It says: `Whoever severs me, then break (away from) him. And whoever maintains me, then keep connected to him."

And in one narration:

"Verily, the kinship will be connected to the Throne of the Most

Merciful on the Day of Judgment. It will say: `This is the place for the one who sought refuge in You from the severing (of family ties). So Allah will say to it: `Will it please you that I connect those who maintained you and that I cut off those who severed you? And it will say: `I will be pleased (with that), my Lord."

And he (s) condemned the oppressive leaders who do not show mercy to their people.